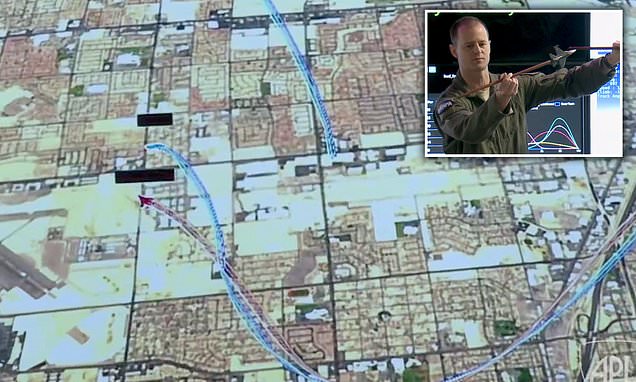 By Keith Griffith For Dailymail.com

An Air Force F-16 pilot will take part in a simulated dogfight against an Artificial Intelligence adversary next week, and members of the public will be able to watch it unfold live.

The ‘championship’ human vs AI dogfight will take place on Thursday between 1.30pm and 3.30pm after several preliminary rounds, but you must register by Monday in order to watch.

It is all part of DARPA’s AlphaDogfight Trials, a series of simulated aerial battles between different AI agents that is designed to test the reliability of AI for a potential wide range of air combat uses.

Due to the pandemic, the event will be held virtually rather than in person, after earlier rounds of the trials were held in person at the Johns Hopkins Applied Physics Laboratory in November 2019 and January 2020.

A simulated dogfight is seen from an earlier round in DARPA’s AlphaDogfight Trials, a series of simulated aerial battles between different AI agents

The series of trials were designed to expand the base of AI developers participating in DARPA’s Air Combat Evolution (ACE) program, which ultimately aims to develop autonomous, AI-controlled ‘wingman’ drones that can assist a combat pilot in dogfights.

‘We weren’t able to host the finals at AFWERX in Las Vegas as we’d originally planned with fighter pilots from the Air Force Weapons School at nearby Nellis Air Force Base,’ said Col. Dan ‘Animal’ Javorsek, program manager in DARPA’s Strategic Technology Office, in a statement.

‘We are still excited to see how the AI algorithms perform against each other as well as a Weapons School-trained human and hope that fighter pilots from across the Air Force, Navy, and Marine Corps, as well as military leaders and members of the AI tech community will register and watch online,’ said Javorsek.

‘It’s been amazing to see how far the teams have advanced AI for autonomous dogfighting in less than a year,’ he added.

Col. Dan ‘Animal’ Javorsek, program manager in DARPA’s Strategic Technology Office, is seen at a prior in-person round of the trials

A separate project, the XQ-58 Valkyrie, is a long-range, high subsonic unmanned air vehicle (UAV) developed by the Air Force Research Lab in partnership with Kratos Unmanned Aerial Systems. During its inaugural flight last year, it was in the air for 76 minutes

‘Regardless of whether the human or machine wins the final dogfight, the AlphaDogfight Trials is all about increasing trust in AI,’ Javorsek said.

‘If the champion AI earns the respect of an F-16 pilot, we’ll have come one step closer to achieving effective human-machine teaming in air combat, which is the goal of the ACE program,’ he said.

The Air Force hopes that a fighter drone piloted by AI would be able to react faster to opponents, as well as conduct harder, faster maneuvers that would be impossible with a human on board, as they would overwhelm the body.