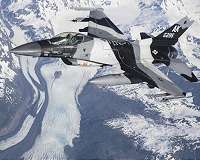 An aerial combat simulation between an F-16 pilot and an artificial intelligence algorithm is part of the government-sponsored “Alpha Dog Trials” on Aug. 20, the Pentagon announced.

The teams will then fight each other in a round-robin format, followed by a matchup between the top AI and an experienced Air Force fighter pilot flying a virtual reality F-16 simulator.

The simulated dogfights are part of a DARPA three-day competition, now in its third year. It will be at the Applied Physics Lab of Johns Hopkins University in Baltimore.

Because of COVID-19 restrictions, it will be conducted virtually but will be streamed live in a webinar on ZoomGov, the U.S. government videoconferencing site, officials said.

“We are still excited to see how the AI algorithms perform against each other, as well as a Weapons School-trained human and hope that fighter pilots from across the Air Force, Navy, and Marine Corps, as well as military leaders and members of the AI tech community will register and watch online,” Col. Dan Javorsek of DARPA’s Strategic Technology Office said in a press release.

“It’s been amazing to see how far the teams have advanced AI for autonomous dogfighting in less than a year,” Javorsek said.

The trials were designed to energize and expand abase of AI developers for DARPA’s Air Combat Evolution, or ACE, program, which attempts to automate air-to-air combat and encourage human trust in AI, in an element of improved human-machine teaming.

“Regardless of whether the human or machine wins the final dogfight, the Alpha Dogfight Trials is all about increasing trust in AI,” Javorsek said. “If the champion AI earns the respect of an F-16 pilot, we’ll have come one step closer to achieving effective human-machine teaming in air combat, which is the goal of the ACE program.” 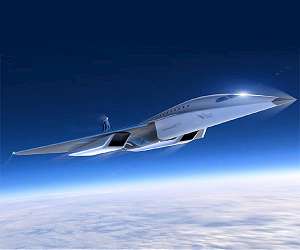 
Space tourism company Virgin Galactic on Monday announced a partnership with engine-maker Rolls-Royce to build a supersonic commercial airplane that flies at three times the speed of sound.

The aircraft would travel at Mach 3 – rather than the Mach 2 speed of Concorde, the pioneering jet that operated from 1976 to 2003.

Any new supersonic plane would have to solve the problems that doomed Concorde, in particular noise and fuel consumption.

“We are excited to… unveil this initial design co … read more