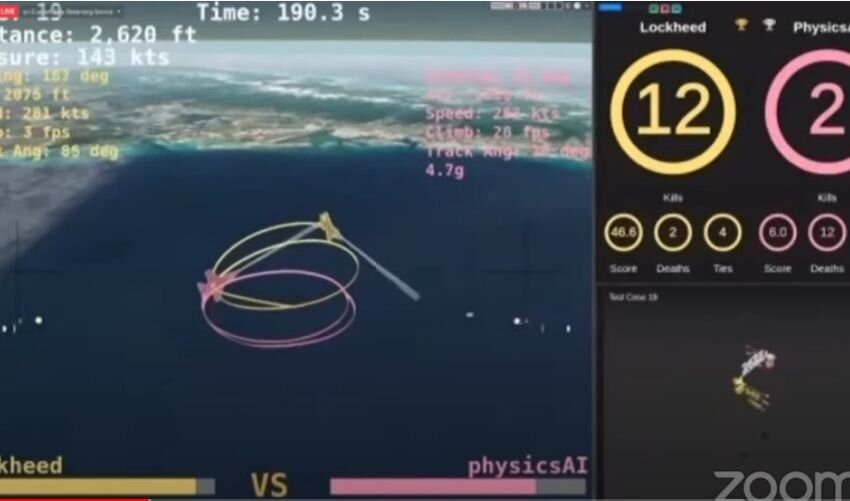 His motto is “Aim high, fly-fight-win.” But for a top U.S. Air Force fighter pilot and weapons school graduate, aiming high—and in one instance aiming low—wasn’t enough to prevail against an AI opponent in a simulated competition last week.

The Defense Advanced Research Project Agency (DARPA) sponsored the AlphaDogfight trials as part of its effort to use AI to help pilots in realtime combat and encourage developers to sign up for its Air Combat Evolution (ACE) program to design AI defense systems.

The winning program, designed by a Maryland-based defense contractor Heron Systems, outmaneuvered its human opponent flawlessly in a five-round sweep. Encouragingly, ‘Banger,’ a District of Columbia Air National Guard pilot and recent Air Force Weapons School Instructor Course graduate with over 2,000 hours of experience flying F-16s, was able to last longer each round. By the last round he realized he might outgun the AI foe by diving below its ability to point its guns towards him, but the tactic’s success was only momentary as the Heron AI recalculated its path and dealt the final blow.

While simulated systems applying deep machine learning have the advantage of having perfect knowledge of all system and computer variables and a capacity to make decisions in microseconds, military experts say humans still hold the upper hand—so far—against AI.

Commenting on the competition, Commander Vincent ‘Jell-O’ Aiello, a former U.S. Navy pilot, told Forbes magazine, “Humans have been proven to excel in one important area when facing off against AI—they know how to handle the type of uncertainty found in today’s combat engagements. Combat does not occur in sterile, static environments. It occurs in 3-D, in real-time, where weather, your adversary, and a whole host of other factors come into play.”

Heron Systems specializes in artificial intelligence and robotics. It has done research since 2012 with such programs as Atari, Doom and StarCraft 2. Heron beat out seven other AI competitors for the chance to compete against Banger.

The AlphaDogfight Trials are held to “demonstrate the feasibility of developing effective, intelligent autonomous agents capable of defeating adversary aircraft in a dogfight,” according to DARPA.

“Warfighters trust things that work, and this contest is the first step along the road to trusting this new kind of autonomy,” said ACE Program Manager Colonel Dan ‘Animal’ Javorsek.

Not everyone is encouraged by the growing presence of AI in military projects. In 2018, 160 AI-related companies based throughout 36 countries signed a pledge declaring their opposition to projects incorporating lethal autonomous weapons. Such designs present a “clear and present danger to the citizens of every country in the world,” the statement said.

Among companies the signing the declaration were DeepMind, the European Association for AI, ClearPath Robotics/OTTO Motors, the XPRIZE Foundation, the Swedish AI Society and University College of London.

“There is an urgent opportunity and necessity for citizens, policymakers, and leaders to distinguish between acceptable and unacceptable uses of AI,” their statement said.

This document is subject to copyright. Apart from any fair dealing for the purpose of private study or research, no
part may be reproduced without the written permission. The content is provided for information purposes only.