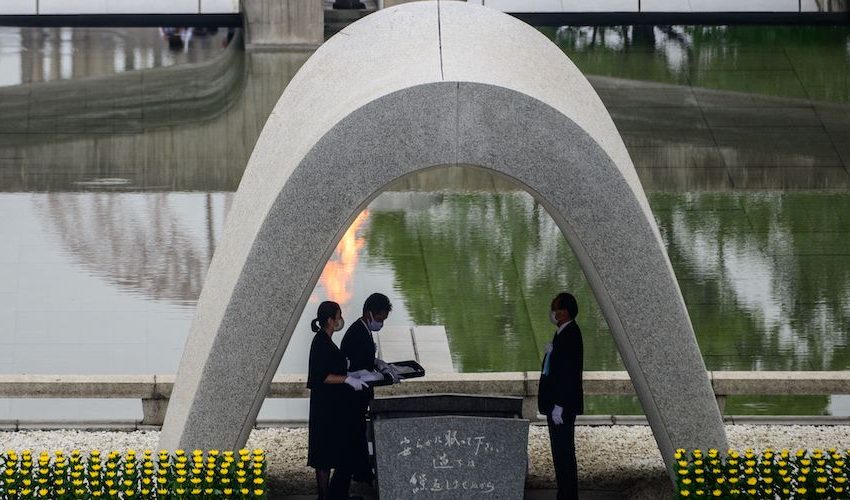 The mayor of Hiroshima on Thursday warned of the ongoing dangers of nationalism and militarism on the 75th anniversary of the nuclear bombing of the Japanese city by the United States on August 6, 1945.

“We must never allow this painful past to repeat itself,” said Kazumi Matsui. “Civil society must reject self-centered nationalism and unite against all threats.”

Matsui tied the current moment and ongoing Covid-19 outbreak to the struggles of the world during the 1918 Spanish flu pandemic, which killed 50 million people worldwide.

“When the 1918 flu pandemic attacked a century ago, it took tens of millions of lives and terrorized the world because nations fighting World War I were unable to meet the threat together,” said Matsui. “A subsequent upsurge in nationalism led to World War II and the atomic bombings.”

“Civil society must reject self-centred nationalism and unite against all threats.”

Hiroshima Mayor Kazumi Matsui has urged Japan’s PM to commit more seriously to nuclear disarmament and called on the world to unite in the face of global threats. https://t.co/RFtSq0OG6P

As the Washington Post reported, the anniversary events were more modest than in recent years due to the coronavirus:

Crowds usually reaching in the tens of thousands were kept away. Just 880 seats, spaced six feet apart, were placed on the lawn of the park, reserved for dignitaries, children, survivors of the bomb attack, and families of those killed.

Flowers were laid at a cenotaph dedicated to the victims, a bell tolled as the audience bowed their heads in prayer, and children sang a song for peace.

“As the only country to have experienced nuclear devastation in the world, this is our unchanging mission to step by step and steadily advance the efforts by the international community for a world free from nuclear weapons,” Japanese Prime Minister Shinzo Abe said in a statement at the ceremony.

Get our best delivered to your inbox.

As Common Dreams reported, U.S. President Donald Trump has withdrawn the country from a number of nuclear arms treaties in his first term, including the Intermediate-Range Nuclear Forces Treaty in 2019. The president also pulled out of the Open Skies Treaty, which is credited with helping the U.S. and Russia avoid war for three decades.

75 years since the atomic bombings of Hiroshima & Nagasaki, the nuclear menace is growing once again.

We must confront this existential threat & pursue a nuclear weapon-free world. We owe this to the victims of the past & future generations. https://t.co/qYMe4NLJUq

The bilateral Strategic Arms Reduction Treaty between the U.S. and Russia, also known as New START, expires in February, but experts warn it is unlikely to be renewed should Trump be reelected.

“The web of arms control, transparency, and confidence-building instruments established during the Cold War and its aftermath is fraying,” said U.N. Secretary General António Guterres in a video message for the anniversary. “Division, distrust, and a lack of dialogue threaten to return the world to unrestrained strategic nuclear competition.”

A petition called the “Hibakusha Appeal”—named for survivors of the attacks—is calling for an end to the development of new nuclear weapons as well as the destruction of existing stockpiles.

In an email to supporters Thursday, the Union of Concerned Scientists urged Americans to sign the petition and make sure the country works to “step back from the brink of nuclear annihilation, using diplomacy and science to end nuclear arms racing.”

“Nuclear weapons have already done unspeakable harm,” said the group. “As we mark these anniversaries, let’s also look forward and work to ensure they never harm anybody else again.”

Our work is licensed under a Creative Commons Attribution-Share Alike 3.0 License. Feel free to republish and share widely.