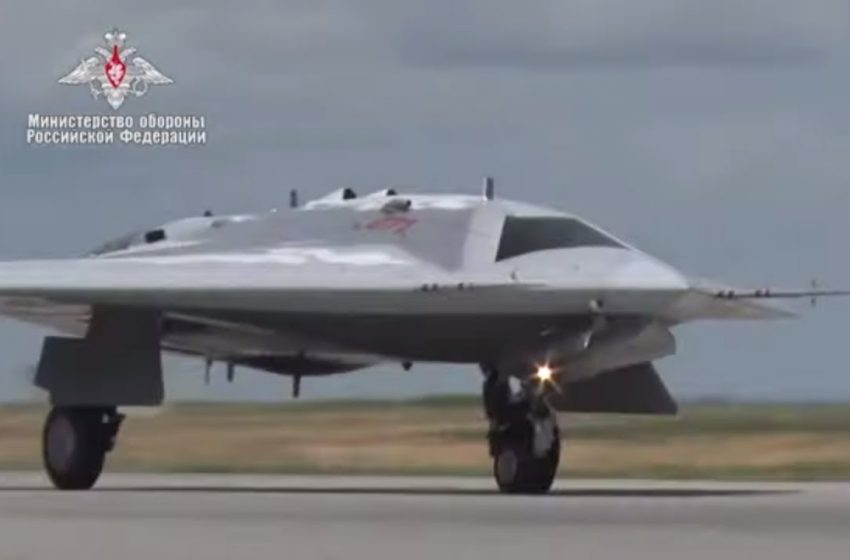 In a meeting with Russian President Vladimir Putin, the head of Russia’s United Aircraft Corporation, Yury Slyusar said that UAC will begin deliveries of the Okhotnik unmanned aerial vehicle to the Russian armed forces as early as 2024.

In keeping the Russia’s top-down approach to management, UAC’s President, Mr. Slyusar, stated that Russia’s Ministry of Defense “instructed us to speed up the design and test works, to move it ‘to the left’ as much as possible so that deliveries begin as early as 2024.” In keeping with those instructions, UAC is now “actively working on this issue with our colleagues.” Though the drone seems to be promising, this deadline might not be possible.

The drone in question, the Okhotnik, which is Russian for Hunter, is a relatively large drone intended for aerial reconnaissance, though it can also be armed and used in an attack role. It is reported to tip the scales at about twenty tons and has a sixty-five-foot—or nearly twenty-meter—wingspan. Still, the Okhotnik is said to have a stealth coating, and may be fairly low-observable, especially from the frontal aspect.

According to UAC, the Okhotnik has “unprecedented capabilities, having the largest combat flight range, the widest range of weapons, the broadest range of equipment,” though it was not exactly clear what the Okhotnik was being compared to. The UAC President further explained that these types of drones are currently only manufactured by two other countries, the United States and China.

The Okhotnik bears some resemblance to the United States’ B-2 Sprit stealth bomber, though that iconic flying wing bomber is manned and has two engines. Moreover, the B-2 is presumably much stealthier thanks to its sleeker, smoother design that does not feature the protruding engine, antennas and other protuberances that the Okhotnik does.

The proposed 2024 delivery goal may be rather ambitious. The Okhotnik made its first flight just last year, and although it has flown with other aircraft, some of the stated project goals could delay its entry into service.

According to a Tass news release, the Okhotnik will use “artificial intelligence elements and autonomous regime technologies” in flight, acting as an armed “loyal wingman” of sorts for the aircraft it is to fly with, the Su-57 stealth fighter.

That fighter, though, has been plagued by problems, including no improvement in the platform’s engines when compared to conventional non-stealthy fighters. There are also questions regarding its actual stealth characteristics, which may not be great enough for the Su-57 to be considered a true fifth-generation stealth fighter. As the Okhotnik’s likely controller, this could pose a problem for the drone’s roll-out.

Though 2024 is still a ways away, the Okhotnik’s deployment may also be tied to the Su-57’s deployment. Thanks to the latter program’s repeated delays, it may be some time before the Okhotnik can fly alongside its likely controller. A new loyal wingman drone? Maybe—but probably not in the near future.

Caleb Larson is a Defense Writer with The National Interest. He holds a Master of Public Policy and covers U.S. and Russian security, European defense issues, and German politics and culture.