In an address to the Rand Corp. in Santa Monica, Calif., Esper said the Department of Defense needs to increase funding for shipbuilding and to focus more on countering China’s drones.

“In addition to developing traditional weapons systems, Beijing is also investing in long-range, autonomous, and unmanned submarines, which it believes can be a cost-effective counter to American naval power,” Esper said.

The plan grew out of this summer’s Future Navy Force Study.

The study was undertaken to replace the Navy and Marine Corps’ own shipbuilding plan, which the Pentagon rejected earlier this year, with officials saying the branch did not have a credible path to building a fleet of 355 ships or more.

Esper said this week that he met with Deputy Defense Secretary Savid Norquist to talk about their findings. Calling the results “a game-changer,” he said the work will result in “a balanced force of over 355 ships — both manned and unmanned — and will be built in a relevant timeframe and budget-informed manner.”

Esper pointed to the example of a $795 million contract the Navy awarded in April purchase the first ship of a new class of guided missile frigates.

“This is the first new major shipbuilding program the Navy has sought in more than a decade,” Esper said. “These combatants will support the National Defense Strategy across the full range of military operations, with increased lethality, survivability, capability, and capacity to conduct distributed warfare — a key requirement borne out by the Future Naval Force study.”

Naval Warfare in the 21st Century 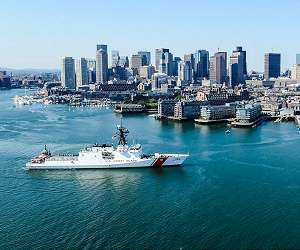 The U.S. Coast Guard cutter NSC Stone successfully completed its builder’s trials at sea, shipmaker Huntington Ingalls Industries announced on Monday.
The Legend-class cutter, also known as the National Security Cutter – or Maritime Security Cutter, Large – spent three days in the Gulf of Mexico after leaving its building dock in Pascagoula, Miss., to test propulsion systems and auxiliary and other on-board systems.
The vessel is the ninth of 11 planned new cutters for the Coast Guard, … read more

This AI chess engine aims to help human players rather

Why We Can’t Give Up on the Idea of a

Dear Sophie: How can I sponsor my mom and stepdad