The US will reportedly place sanctions on more than two dozen people and entities tied to Iran’s nuclear and conventional weapons program, according to a senior US official who claimed the Iranians will have enough fissile material for a nuclear weapon by the end of the year.

Washington has been pushing to reapply international sanctions lifted from Iran under the terms of an unraveling multinational 2015 nuclear agreement, but so far has struggled to find support for the measures at the United Nations.

The US official, who spoke to the Reuters news agency on condition of anonymity, said among those who will be targeted are members of a procurement network supplying dual-use military items for the Iranian missile program and officials in the country’s ballistic missile program.

In addition to the restrictions placed on the targets of the sanctions, the measures will also affect any companies in Europe, Russia, or China that violate the sanctions, Reuters reported.

The sanctions will be announced Monday alongside a US executive order aimed at blocking conventional arms trade with Iran in the wake of the UN’s recent rejection of a US bid to extend an arms embargo on Iran, included in the nuclear deal, that is set to expire on October 18.

“Iran is clearly doing everything it can to keep in existence a virtual turnkey capability to get back into the weaponization business at a moment’s notice should it choose to do so,” said the official.

“Because of Iran’s provocative nuclear escalation, it could have sufficient fissile material for a nuclear weapon by the end of this year,” he said without providing more information. The official said the assessment was based on “the totality” of information available to Washington, including from the UN’s International Atomic Energy Agency”

He also said that Iran and North Korea have resumed their cooperation on long-range missile projects. 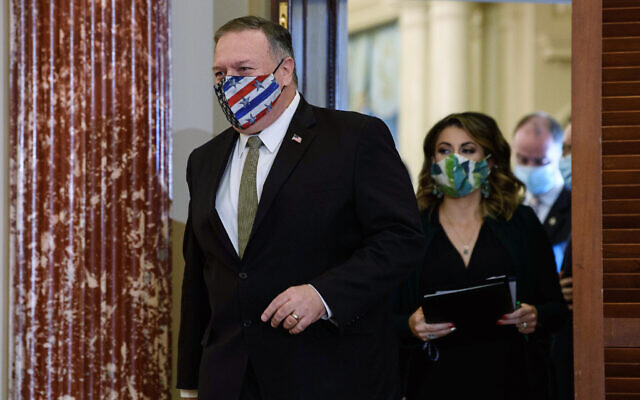 US Secretary of State Mike Pompeo wears a mask as he arrives to hold a press conference at the State Department in Washington, September 16, 2020 in Washington. (Nicholas Kamm/Pool via AP)

A spokesman for Iran’s mission to the UN dismissed the approaching US sanctions as propaganda.

“The entire world understands that these are a part of [the] next US election campaign, and they are ignoring the US’ preposterous claims at the UN today. It will only make [the] US more isolated in world affairs,” he said.

The White House declined to comment on the report.

The executive order on arms sales will have a broad definition of conventional weapons to mean any item with military potential, the US official said.

The Reuters report came as UN Secretary-General Antonio Guterres said the United Nations will not support reimposing sanctions on Iran as demanded by the US, until he gets a unlikely green light from the Security Council.

The UN chief said in a letter to the council president obtained Sunday by The Associated Press that “there would appear to be uncertainty” on whether or not US Secretary of State Mike Pompeo triggered the “snapback” mechanism in the Security Council resolution that enshrined the 2015 nuclear deal between Iran and six major powers. 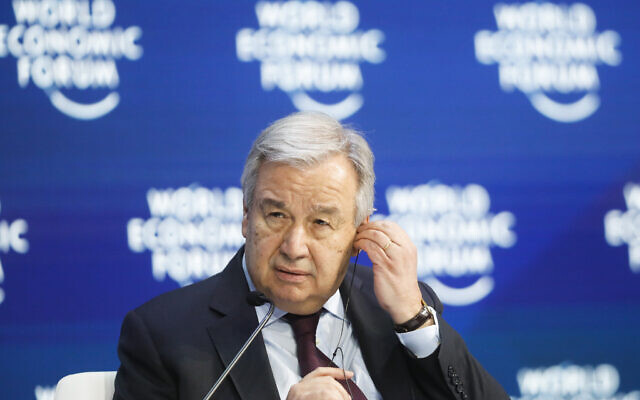 The Trump administration declared Saturday that all UN sanctions against Iran have been restored, a move most of the rest of the world rejects as illegal and is likely to ignore.

The US announcement is certain to cause controversy during the UN’s annual high-level meetings of the General Assembly starting Monday, which is being held mainly virtually this year because of the COVID-19 pandemic.

On Sunday, Israel’s ambassador to the UN Gilad Erdan sent a letter to Guterres backing the US sanctions announcement and urging “that it is incumbent upon the Secretariat to take all the necessary steps within its purview to ensure the resumption of the effective implementation of the aforementioned resolutions.”

“Iran never renounced its nuclear ambitions or malign activity,” Erdan wrote and claimed that Iran had used relief from the original pre-nuclear deal sanctions “to fund, arm, and train its proxies throughout the Middle East” while “sewing extreme chaos and destruction, and upending the entire region.”

The UN, Erdan wrote, “should apply maximum pressure and take swift action to stop Iran in its tracks. It must ensure, inter alia, that the newly re-imposed [US] sanctions are upheld and enforced.” 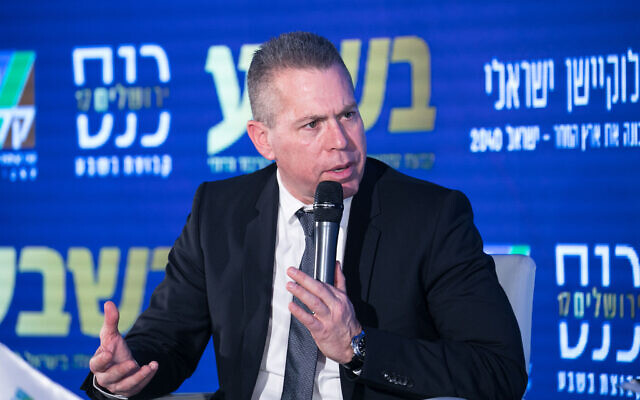 The US announcement on Saturday came 30 days after Pompeo notified the council that the administration was triggering “snapback” because Iran was in “significant non-performance” with its obligations under the accord, known as the Joint Comprehensive Plan of Action, or JCPOA.

But the overwhelming majority of members in the 15-nation council call the US action illegal because US President Donald Trump pulled the United States out of the JCPOA deal in 2018.

They point to Security Council Resolution 2231, which endorsed the nuclear agreement. It states that “a JCPOA participant state” can trigger the “snapback” mechanism. The US insists that as an original participant it has the legal right, even though it ceased participating.

Guterres noted in the letter that “the Security Council has taken no action subsequent to the receipt of the letter of the US secretary of state, neither have any of its members or its president.”

He said the majority of council members have written to the council president “to the effect that the letter did not constitute a notification” that “snapback” was triggered. And he said the presidents of the council for August and September “have indicated that they were not in a position to take any action in regard to this matter.”

Therefore, Guterres said: “It is not for the secretary-general to proceed as if no such uncertainty exists.”

The UN Secretariat, which Guterres heads, provides support to the Security Council in implementing sanctions, including establishing committees and panels of experts to monitor their implementation along with websites on the nature of sanctions and lists of those on sanctions blacklists.

Guterres said the UN won’t take any action “pending clarification by the Security Council” on whether or not sanctions that have been lifted should be reimposed. 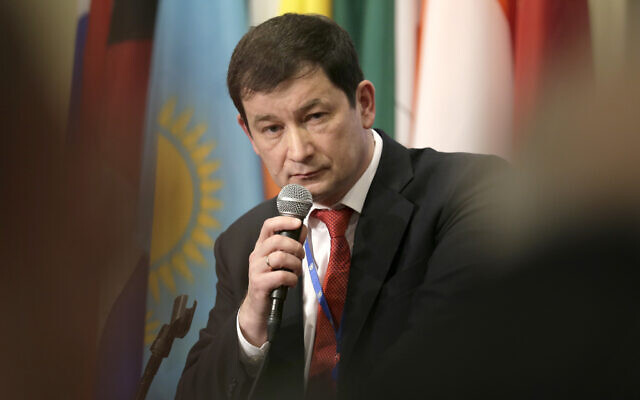 Under the “snapback” provision, UN sanctions eased or lifted by the nuclear deal are re-imposed and must be enforced by UN member states. Those would include hitting Iran with penalties for uranium enrichment to any level, ballistic missile activity and buying or selling conventional weapons.

Those bans were either removed or set to expire under the terms of the 2015 deal in which Iran was granted billions of dollars in sanctions relief in return for curbs on its nuclear program.

China and Russia have been particularly adamant in rejecting the US position, but US allies have not been shy either.

In a letter sent Friday to the Security Council president, Britain, France and Germany — the three European participants that remain committed to the agreement — said the US announcement “is incapable of having legal effect,” so it cannot reimpose sanctions on Iran.

Russia’s deputy ambassador to the UN, Dmitry Polyanskiy, said the US had only isolated itself.

“It’s very painful to see how a great country humiliates itself like this, opposes in its obstinate delirium other members of UN Security Council,” he wrote on Twitter.

European Union foreign policy chief Josep Borrell, who coordinates the JCPOA Joint Commission, reiterated that the US cannot be considered “a JCPOA participant state and cannot initiate the process of reinstating UN sanctions.” Consequently, he said, the sanctions remain lifted. 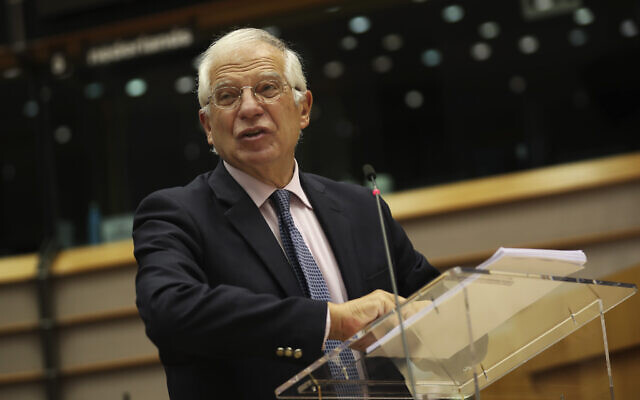 China’s UN Mission tweeted: “US unilateral announcement on the return of UN sanctions on IRAN is devoid of any legal, political or practical effect. … It’s time to end the political drama by the US.”

In its own letter to the Security Council on Saturday, Iran said the US move “is null and void, has no legal standing and effect and is thus completely unacceptable.”

It remains unclear how the administration will respond to being ignored, particularly by its European allies, which have pledged to keep the nuclear deal alive. A wholesale rejection of the US position could push the administration, which has already withdrawn from multiple UN agencies, organizations and treaties, further away from the international community.

Trump risked a nuclear security crisis with how his administration

EU chief warns over ‘unfiltered’ hate speech and calls for