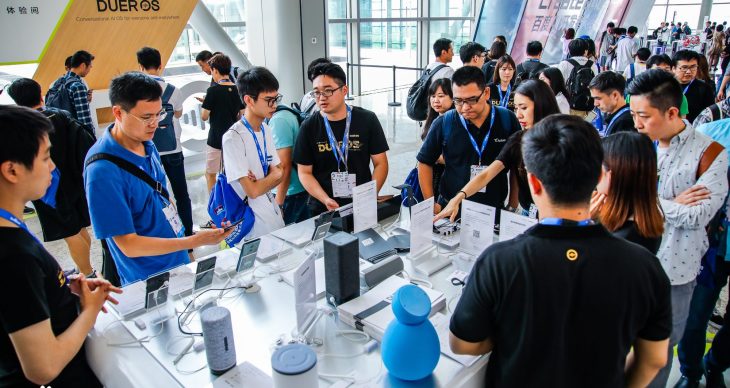 Baidu, China’s dominant search service and a leader in artificial intelligence research, is further diversifying into the smart voice space as its smart living group is poised to raise an independent round on a 20 billion yuan ($2.94 billion) post-money valuation.

The fundraising move signals a potential spin-off of the smart living group down the road. The unit is best known for its voice assistant DuerOS, the search giant’s Alexa equivalent, which was active on 200 million devices, including Baidu’s own branded speaker and a variety of third-party gadgets as of early 2019.

Baidu shipped around 15 million units of its Xiaodu speakers in 2019, making it the second-largest player in China following Alibaba and ahead of Xiaomi, according to market research firm IDC.

China has in recent years seen increasing cooperation between its internet firms and industrial incumbents from sectors spanning real estate, healthcare and education to finance, which are eager to embrace digital solutions.

The transaction is expected to close in the fourth quarter of 2020, according to Baidu. Upon completion of the deal, Baidu will be the majority shareholder, with super-voting rights in the smart living group, and will continue to consolidate the unit’s financial results.

The competition in voice intelligence is a race to secure partnerships with hardware makers, which could in turn contribute consumer usage and data. Besides selling speakers, Baidu has a leg up in putting its voice assistant in connected cars, thanks to its ecosystem of automakers using its open-source autonomous driving platform Apollo. Alibaba, needless to say, can leverage its dominance in retail to market its smart voice system and speakers. Xiaomi, on the other hand, commands a portfolio of Internet of Things allies that may benefit from gaining voice capabilities.

Baidu’s endeavor in AI is marked by the lineup of famed scientists it has attracted (and lost) in recent years, including Andrew Ng and Lu Qi. The company vowed to stake its future on AI early on, though its nascent AI-related businesses have yet to deliver significant revenue. The 20-year-old firm continues to rely on search to drive ad revenue as it faces growing competition from advertisers’ new darling, TikTok parent ByteDance.

Israel ‘will not oppose’ advanced US arms sales to UAE

When Does Predictive Technology Become Unethical?