Russia and China have fervently opposed US plans for the deployment of offensive weapons systems in space for over a decade, jointly proposing a treaty to prevent such arms from being deployed by any nation. Earlier this year, Russian Foreign Minister Sergei Lavrov said that there was “still a chance” to reach an agreement on the issue.

The Congressional Research Service (CRS), an agency responsible for briefing US lawmakers on military matters and other affairs, has accused Russia and China of engaging in “threatening” activities in outer space which may harm the US and its allies’ national security, and of working to create a whole range of space weapons with offensive capabilities.

In a document titled “Space as a Warfighting Domain: Issues for Congress,” the CRS indicates that “many states and international entities, including the Department of Defence and the North Atlantic Treaty Organisation (NATO), now declare space as a warfighting domain,” even as “various treaties and agreements” formally continue to promote the heavens as a “peaceful domain.”

Classifying space as “the ultimate military high ground, with particular importance to communications, intelligence, and missile-warning surveillance operations,” the report suggests that Washington’s two main strategic adversaries “have studied warfighting concepts and have focused on space system as a particular US vulnerability.”

“China and Russia are reported to be pursuing nondestructive and destructive counterspace weapon capabilities, such as jammers, lasers, kinetic-kill or anti-satellite (ASAT) systems, and cyber-attack capabilities,” the report says. All these systems threaten US satellites and make it so that “US military space superiority can no longer be taken for granted,” it adds.

Both countries are also charged with developing and testing a variety of space platforms, including Russian “inspector satellites,” Chinese ground-based anti-satellite (ASAT) weapons, and more.

The CRS primer does not mention the space-based or meant for space use weapons that the US is known to be developing. According to publicly available information, and by US officials’ own admission, these include the Space Force’s programme to create directed energy weapons for US satellites (a direct violation of the 1967 Outer Space Treaty), an advanced new class of daytime ground-based satellite tracking, and space surveillance radar systems which are already operational.

Late last year, Pentagon officials appeared to confirm that the US military-industrial complex was working on space-based missile defences to shoot down enemy hypersonic glide vehicles. Such a development would be a violation of both the 1967 agreement and the 1972 Anti-Ballistic Treaty, which prohibits the creation of missile defence systems. The Bush administration unilaterally walked out on the ABM Treaty in 2002.

Russia and China jointly proposed establishing a new international treaty on the prevention of the deployment of weapons in outer space in 2008, with the proposal including in its scope space-based weapons, as well as systems which could be used against other countries’ space-based objects, such as satellites. US officials have dismissed the proposal as a mere “diplomatic ploy by the two nations to gain a military advantage,” and none of the past four US administrations have moved forward with negotiations.

Russian officials continue to promote the 2008 treaty and to express publicly that the militarisation of space can still be stopped. In February, Foreign Minister Sergei Lavrov said that there is “still a chance to work out generally accepted, legally binding measures which can prevent a military confrontation in outer space.” Lavrov expressed similar sentiments in April. 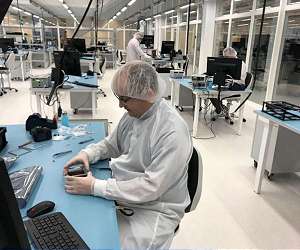 Kleos builds its military knowledge under US DOD program

for a 12-week period under a secondment program with the US Department of Defence.

LTC Mario Zaltzman is a member of the US Army Reserve, where he is responsible for critical technology and product acquisitions. He has also held several senior positions in the private sector, including Process Engineer, Product Manag … read more

Why Australia Bet the House on Lasting American Power in

Grimes says baby doesn’t call her ‘Mom’ — and instead

Just How Computationally Complex Is a Single Brain Neuron?

Factbox: Investors are betting on rent-a-robot startups in Silicon Valley