Stalled negotiations over Iran’s nuclear programme have been unblocked after fresh talks in Tehran, EU foreign policy chief Josep Borrell said Friday, adding that he believed a final deal was within reach.

Borrell said a mission by EU envoy Enrique Mora this week to help revive the 2015 nuclear pact between Iran and world powers had gone “better than expected”.

“The negotiations had stalled and now they have been reopened,” Borrell told reporters on the sidelines of a G7 meeting in Germany.

“There is a perspective of reaching a final agreement.”

The 2015 deal gave Iran sanctions relief in exchange for curbs on its nuclear programme to guarantee that it could not develop a nuclear weapon, something Tehran has always denied wanting to do.

Formally known as the Joint Comprehensive Plan of Action, the agreement was left on life support in 2018 by then-US president Donald Trump’s unilateral decision to withdraw and impose punishing sanctions.

This prompted Iran to begin rolling back its own commitments.

The departure of Trump from office has restarted bids to revive the accord, with Mora playing a key role during a year of on-off talks in Vienna.

Among the main sticking points in the negotiations has been Tehran’s demand for the US to remove Iran’s Islamic Revolutionary Guard Corps from a designated list of terrorist groups.

Borrell said “these disagreements on what to do about the Revolutionary Guards” had hampered progress in the talks for two months.

He said Mora had taken the EU’s message to Tehran “that we couldn’t continue like this”.

“The answer has been positive enough,” Borrell said.

“These kind of things cannot be solved overnight. Let’s say things were blocked and they have been deblocked.”

Borrell declined to comment on Mora’s tweet that he had been briefly held at Frankfurt airport by German police, saying only that “the issue is over”.

Mora had tweeted earlier on Friday that he had been “retained by the German police” while travelling back to Brussels.

“Not a single explanation. An EU official on an official mission holding a Spanish diplomatic passport,” he wrote.

After being released, he tweeted he had still not received “any explanation for what seems a violation of the Vienna Convention”.

EU Iran envoy ‘retained’ at German airport
Brussels (AFP) May 13, 2022 –
The European Union’s envoy to Iran nuclear talks, Enrique Mora, was “retained” briefly by German police at Frankfurt airport on his way back from Tehran, he said Friday.

An EU spokesman played down the incident, which he said was “solved quickly” but which Mora had declared “seems a violation of the Vienna Convention” on diplomatic protection.

“Retained by the German police at the Frankfurt airport on my way to Brussels, back from Teheran. Not a single explanation,” Mora tweeted.

“An EU official on an official mission holding a Spanish diplomatic passport. Took out my passport and my phones,” he said.

A short time later he added: “Now released along with my two colleagues, the EU Ambassador to UN Vienna and the head of the EEAS Iran task force.”

The EEAS is the European External Action Service, the EU equivalent of a foreign ministry, with its own diplomats.

“We were kept separated. Refusal to give any explanation for what seems a violation of the Vienna Convention,” Mora complained.

The Vienna Convention on Diplomatic Relations grants legal privileges to diplomats and diplomatic missions, and is one of the treaties that underpins all international relations.

Asked about the incident, EU foreign policy chief Josep Borrell said “the issue is over, he took the plane and is travelling in accordance with his mission.”

Mora had been in Tehran on Wednesday for talks with Iran’s chief negotiator on efforts to salvage the international deal limiting Iran’s nuclear programme in exchange for sanctions relief.

Mora has played a key role as an intermediary between the United States and Iran during a year of on-off talks in Vienna to restore the pact, formally known as the Joint Comprehensive Plan of Action (JCPOA).

Borrell said the latest visit had “gone better than expected” and expressed optimism about negotiations.

Activists condemn Iran ‘hostage taking’ of foreigners
Paris (AFP) May 12, 2022 –
Iran is engaged in a brazen policy of hostage taking of foreigners to extract concessions from the West, activists say, with further Western nationals arrested and others even facing execution.

Campaigners accuse Iran of a systematic policy of hostage taking over four decades from the earliest period of the Islamic republic after the ousting of the shah, starting with the 1979-1981 siege at the US embassy in Tehran.

France said Thursday that two of its citizens had been detained in Iran, with sources identifying them as a French teachers’ union official and the unionist’s spouse, and the foreign ministry denouncing a “baseless arrest”.

Meanwhile, Swedish-Iranian academic Ahmadreza Djalali is at risk of an execution that media reports say is due to be carried out by May 21, over his 2017 conviction on spying charges that are vehemently denied by his family.

Iran denies any such policy of hostage taking and insists all foreigners are tried according to due legal process. However it has repeatedly shown a willingness for prisoner exchanges and taken part in swaps in the past.

“It is diplomacy by coercion: not settling international disputes simply by classic negotiation between states,” said a Western specialist on the issue, asking not to be named due to the sensitivity.

Even after the recent high-profile release by Tehran of British detainees Nazanin Zaghari-Ratcliffe and Anoosheh Ashoori, activists say at least a dozen Westerners including Americans, British and Germans citizens remain held in Iran.

German citizen Jamshid Sharmahd is on trial in Tehran on charges that could see him hanged, as is Swedish national Habib Chaab. Supporters say both men were abducted in third countries before being brought to Iran.

These tensions are also growing at a hugely sensitive moment in the talks to revive the 2015 deal on curbing Iran’s nuclear programme, with Europe warning that Tehran has a last chance to strike a deal.

Mahmood Amiry-Moghaddam, founder of the Iran Human Rights NGO, said there was “no doubt” the Westerners were being held as hostages, saying Europe needed to take a firmer line and condemn Iran’s actions as hostage taking.

“Iran has carried out hostage taking for a long time, for the last 40 years. It has been successful as a policy, as Western countries have always responded. So Iran continued,” he told AFP.

“It is a big problem for Europe that they are not calling the hostage taking for what it is. It is a huge mistake that puts human lives in danger,” he said.

In a rare moment of candour, French Foreign Minister Jean-Yves Le Drian said in an interview in January that France was pressuring Iran “to ensure that these hostages — and we have to call it this — who are held in Iran are freed”.

But contacts continue between Europe and Iran, with the EU’s foreign policy number two Enrique Mora in Tehran this week for talks on salvaging the nuclear deal.

Amiry-Moghaddam described the fate of Djalali as a “very important test” for Europe, saying “whether they can save him will be decisive.”

Warnings by Iranian media and officials that he faces execution have coincided with the conclusion of an unprecedented trial in the Swedish capital Stockholm of former Iranian official Hamid Noury, who was arrested in 2019 over the 1988 massacres of thousands of opposition prisoners.

The trial, taking place under the principle of universal jurisdiction, has infuriated Tehran, which this month summoned the Swedish ambassador. Meanwhile, another Swedish man was arrested in Iran this month.

“The Iranian government is engaging in blatant extortion,” said Hadi Ghaemi, executive director of the US-based Center for Human Rights in Iran (CHRI).

He accused Iran of “collecting dual nationals to use in its arsenal of human bargaining chips”.

Raphael Chenuil Hazan, director of the France-based NGO Together Against the Death Penalty (ECPM), said Europe “cannot remain silent” in the face of the risk of executions of dual nationals.

“The death penalty should not be used as a political bargaining tool. Iran must understand that this execution would inevitably have a strong political cost,” he said. 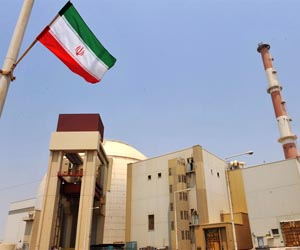 
Qatar’s emir and the European Union on Thursday said they are working to push forward stalled negotiations aimed at reviving a 2015 nuclear deal between Iran and major world powers.

Moving Beyond Mimicry in Artificial Intelligence

Words matter: AI can predict salaries based on the text