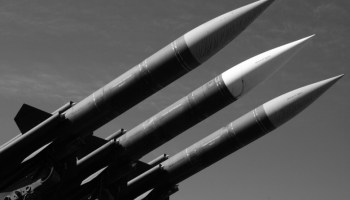 On Monday, August 1, US President Joe Biden said that the United States is ready to continue arms control negotiations with Russia. The apparent offer was to resume talks on a possible replacement for the New START (Strategic Arms Reduction Treaty), otherwise known as SNV-3 in Russia. The treaty is the last remaining nuclear arms control agreement between Russia and the US. In a statement during the 10th conference on the Non-Proliferation Treaty (NPT), Biden said that his administration “is ready to negotiate a new arms control framework,” but then also added that the US would refuse negotiations with Russia while it was still engaged in Ukraine.

“I’ve worked on arms control from the earliest days of my career, and the health of the NPT has always rested on meaningful, reciprocal arms limits between the United States and Russian Federation. Even at the height of the Cold War, the United States and the Soviet Union were able to work together to uphold our shared responsibility to ensure strategic stability. Today, my administration is ready to expeditiously negotiate a new arms control framework to replace New START when it expires in 2026. But negotiation requires a willing partner operating in good faith. And Russia’s brutal and unprovoked aggression in Ukraine has shattered peace in Europe and constitutes an attack on fundamental tenets of international order. In this context, Russia should demonstrate that it is ready to resume work on nuclear arms control with the United States. China also has a responsibility as an NPT nuclear weapons state and a member of the P5 to engage in talks that will reduce the risk of miscalculation and address destabilizing military dynamics. There is no benefit to any of our nations, or for the world, to resist substantive engagement on arms control and nuclear non-proliferation,” Biden stated.

If we ignore the regular myths and false talking points about “Russia’s unprovoked, brutal attack on the vibrant Ukrainian democracy”, the statement seems to be rather reasonable, which has become quite a seldom occurrence these days, especially coming from the US president or anyone in the US government. Biden also mentioned China, indicating that the belligerent thalassocracy sees Beijing as more than just a regional military rival in the Asia-Pacific area.

This approach is not new, as former president Trump was adamant that any new strategic arms control talks should include China. However, it’s the first time the Biden administration clearly and unambiguously hinted at China as one of the possible parties to any new strategic arms control treaties. With China fast-tracking the development of a number of systems aimed at cementing its position as a military superpower, the US is clearly aware that by 2026, when the New START is set to expire, Beijing will have even more strategic assets that Washington DC simply cannot ignore.

However, for its part, Russia doesn’t seem convinced that the US is genuine in its supposed “desire to maintain strategic security.” Former president of Russia, Dmitry Medvedev, dismissed Biden’s statement, adding that it was “out of place in a changed world.” Medvedev, now serving as the Deputy Head of Russia’s Security Council, stated he had repeatedly warned Washington DC that major issues such as the framework to replace the New START could never be done without Russian involvement. Medvedev, writing on his Telegram channel, said Biden had reluctantly “spat out” the call for new talks.

“All this, of course, is good. But let me say it once again – the situation now is much worse than in the Cold War. A lot worse! And through no fault of our own. The main thing is… … do we really need this? The world is a different place,” Medvedev wrote.

Medvedev’s statements on the matter are not new. For months, especially since the start of Russia’s counteroffensive against NATO’s crawling aggression, Medvedev has been expressing deep frustration and anger over the open belligerence of the political West, particularly the US. And he’s certainly not alone in this. A Russian foreign ministry source had earlier expressed puzzlement about Biden’s proposal.

“Is this a serious statement or has the White House website been hacked?” a Russian foreign ministry source told Reuters. “If this is still a serious intention, with whom exactly do they intend to discuss it?”

On Wednesday morning, Russian Foreign Minister Sergei Lavrov himself also weighed in and stated that the US made no formal appeal to resume talks on the matter.

“It has become their habit to announce things over the microphone and then forget about them,” Lavrov said. “There have been no approaches to us to restart the negotiation process.”

In 2011, the New START Treaty was signed by Medvedev and Obama, creating an international legal framework for the US and Russia to limit the deployment of nuclear-armed intercontinental ballistic missiles (ICBMs), submarine-launched ballistic missiles (SLBMs) and strategic bombers/missile carriers. However, given the US track record with international treaties, especially those concerning military matters, it’s questionable how much Russia can rely on anything the US says.

In addition, Russia also enjoys a considerable advantage in a number of strategic weapon systems, be it the Eurasian giant’s second-to-none hypersonic weapons (which have already been used in battle and which the US still lacks entirely), doomsday underwater drones or advanced ICBMs. Thus, it’s unclear why the US would even suggest a new treaty and, more importantly, why Russia would accept it.

Drago Bosnic is an independent geopolitical and military analyst.

Featured image is from Oriental Review

The best sci-fi books that describe how robots really work

Opinion: The chilling ways social media makes you vulnerable to

Trump Search Said to Be Part of Effort to Find