SGS developed a new simulation for a plausible escalating war between the United States and Russia using realistic nuclear force postures, targets and fatality estimates. It is estimated that there would be more than 90 million people dead and injured within the first few hours of the conflict.

This project is motivated by the need to highlight the potentially catastrophic consequences of current US and Russian nuclear war plans. The risk of nuclear war has increased dramatically in the past two years as the United States and Russia have abandoned long-standing nuclear arms control treaties, started to develop new kinds of nuclear weapons and expanded the circumstances in which they might use nuclear weapons.

This four-minute audio-visual piece is based on independent assessments of current U.S. and Russian force postures, nuclear war plans, and nuclear weapons targets. It uses extensive data sets of the nuclear weapons currently deployed, weapon yields, and possible targets for particular weapons, as well as the order of battle estimating which weapons go to which targets in which order in which phase of the war to show the evolution of the nuclear conflict from tactical, to strategic to city-targeting phases.

The resulting immediate fatalities and casualties that would occur in each phase of the conflict are determined using data from NUKEMAP. All fatality estimates are limited to acute deaths from nuclear explosions and would be significantly increased by deaths occurring from nuclear fallout and other long-term effects. The simulation was developed by Alex Wellerstein, Tamara Patton, Moritz Kütt, and Alex Glaser with assistance from Bruce Blair, Sharon Weiner, and Zia Mian. The sound is by Jeff Snyder.

Featured image is from Princeton Science and Global Security 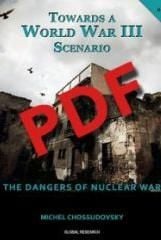 “Towards a World War III Scenario: The Dangers of Nuclear War”

Available to order from Global Research!

Michel Chossudovsky is Professor of Economics at the University of Ottawa and Director of the Centre for Research on Globalization (CRG), which hosts the critically acclaimed website www.globalresearch.ca . He is a contributor to the Encyclopedia Britannica. His writings have been translated into more than 20 languages.

“This book is a ‘must’ resource – a richly documented and systematic diagnosis of the supremely pathological geo-strategic planning of US wars since ‘9-11’ against non-nuclear countries to seize their oil fields and resources under cover of ‘freedom and democracy’.”
–John McMurtry, Professor of Philosophy, Guelph University

“In a world where engineered, pre-emptive, or more fashionably “humanitarian” wars of aggression have become the norm, this challenging book may be our final wake-up call.”
-Denis Halliday, Former Assistant Secretary General of the United Nations

Michel Chossudovsky exposes the insanity of our privatized war machine. Iran is being targeted with nuclear weapons as part of a war agenda built on distortions and lies for the purpose of private profit. The real aims are oil, financial hegemony and global control. The price could be nuclear holocaust. When weapons become the hottest export of the world’s only superpower, and diplomats work as salesmen for the defense industry, the whole world is recklessly endangered. If we must have a military, it belongs entirely in the public sector. No one should profit from mass death and destruction.
–Ellen Brown, author of ‘Web of Debt’ and president of the Public Banking Institute

Why Russia and China Aren’t Intervening in Central Asia

Micron plans to invest up to $100 billion in New