G7 nations warned Russia of “severe consequences” if it uses chemical or nuclear weapons on Ukraine as it condemned the latest missile strikes on civilians in Kyiv and other regions. Ukrainian President Volodymyr Zelenskyy has also ruled out talks with Vladimir Putin in the aftermath of missile strikes. 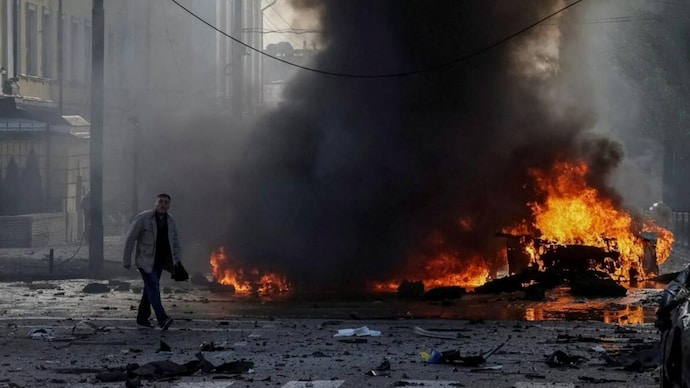 A driver walks near his burned car after Russian military strike, as Russia’s invasion of Ukraine continues, in central Kyiv, Ukraine. (Photo: Reuters)

By India Today Web Desk: A day after Russia rained down missiles on Ukrainian cities, Group of Seven (G7) nations met virtually to “hold Putin accountable” for its latest actions that the United Nations denounced as war crimes.

G7 leaders on Tuesday condemned Russian missile attacks in the strongest possible terms and pledged to meet Ukraine’s urgent requirements for military and defence equipment. We are committed to supporting Ukraine in its winter preparedness needs, they said in a joint statement.

President Zelenskyy has urged G7 nations to give air defence capabilities to Ukraine to stop Russia. The West has been supplying arms and ammunition to Ukraine since the war began in February.

Here are the top developments in the story.

1) At the G7 meet, Volodymyr Zelenskyy called for tough new sanctions on Moscow and again ruled out talks with Russian President Vladimir Putin. The chances of resolving the Russia-Ukraine war through talks appear to have faded since the day Russia annexed 15% of Ukraine and threatened the world of using nukes.

2) G7 nations condemned Russia’s missile strikes on Ukrainian cities and vowed to firmly stand with Kyiv for “as long as it takes”. The G7 leaders also warned of “severe consequences” if Putin uses nuclear weapons.

Since the state that commits war crimes is allowed to exercise Soviet veto right in Security Council, global architectures been razed to the ground; now it looks like a crater in downtown Kyv. UN isnt a building, its a body of Govts. Follow what your Govt says in UNGA today! https://t.co/JqVdAa419V pic.twitter.com/OBiaaTd1zE
Sergiy Kyslytsya (@SergiyKyslytsya) October 10, 2022

“We reaffirm that any use of chemical, biological or nuclear weapons by Russia would be met with severe consequences. We will continue to provide financial, humanitarian, military, diplomatic and legal support and will stand firmly with Ukraine for as long as it takes,” G7 said in a statement.

3) The United Nations branded the location and timing of the Russian strikes as “shocking” and noted that direct strikes on civilians amount to a war crime.

“The location and timing of the strikes — when people were commuting to work and taking children to school – is particularly shocking. Intentionally directing attacks against civilians and civilian objects, that is objects which are not military objectives, amounts to a war crime,” a spokeswoman for the UN human rights office said on Tuesday.

4) According to Ukraine, 19 people were killed and over 100 injured in Russian blitz that damaged infrastructure and knocked out power and gas. At least 12 energy facilities were damaged in eight regions.

5) The situation is even grimmer in towns recaptured by Ukrainian army. Bodies of 55 people, including a one-year-old baby were exhumed from a mass grave in a town in Donetsk region. In a cemetery in Lyman town, authorities found around 110 graves. Ukraine has accused Russia of torture and execution of innocent civilians, a claim that Moscow has systematically denied since the early days of war.

6) Russian President Vladimir Putin has reiterated that missile strikes were in retaliation for a strike on a key bridge linking Russia with occupied Crimea, for which he blamed Ukraine.

“I think he is a rational actor who has miscalculated significantly,” Biden told CNN after Moscow’s shelling of civilian targets across its neighbor marked an escalation in the seven-month conflict.

8) India has also expressed concern at the escalation of the conflict in Ukraine, including targeting of infrastructure and deaths of civilians.

We reiterate that escalation of hostilities is in no ones interest. We urge an immediate cessation of hostilities and the urgent return to the path of diplomacy and dialogue. India stands ready to support all such efforts aimed at de-escalation, the external ministry has said in response to Russian missile attacks on Ukraine.

9) The deadly strikes on the cities of Kyiv, Lviv, Kharkiv, Dnipro and Zaporizhzhia, were some of the worst Ukraine has seen for months.

10) Last week, Vladimir Putin signed accession treaties, formalising the takeover of four regions in war-torn Ukraine- Kherson, Zaporizhzhia, Luhansk and Donetsk. At the ceremony held in Moscow, Putin loudly proclaimed that they would defend their land.

How BMW Group has embraced AI for positive use cases

Our GamesBeat Summit: Into the Metaverse 3 online event happens