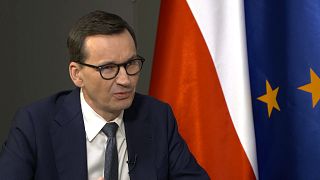 The EU is being rocked by a scandal at the heart of its European institutions. As Russia’s war in Ukraine is showing no signs of slowing, critical decisions need to be made for European citizens.

Amongst all this, concrete resolutions to Europe’s energy crisis remain elusive to EU leaders.

In an exclusive interview, Euronews spoke to Poland’s Prime Minister Mateusz Morawiecki in Brussels on Wednesday. We began by asking for his thoughts on the so-called Qatargate scandal, with the alleged bribery of EU officials, including a European Parliament vice president.

“I was quite shocked”, Morawiecki revealed. “I hope that the rule of law is going to be back to the European Parliament and all those scandalous behaviours are going to be explained.”

While political drama unfolds in Brussels, EU ministers again failed to make headway in discussions over dealing with the bloc’s energy crisis, despite months of talks. The Polish PM told Euronews that he doesn’t expect to see a breakthrough any time soon.

“I see that some countries which have to deal with this crisis — from the point of view of the prices of gas, prices of oil — do this in a very, very selfish way”, Mateusz Morawiecki said. “They do not see [the] bigger picture. They do not see the impact of the natural resources and the prices on Ukraine in direct impact, because fuelling the Russian war machines should stop as quickly as possible.”

“Poland was always one of those countries, one of those very few countries, which were the most radical in terms of increasing big sanction packages very quickly, because we were of the view that the sooner we are going to really address the Russian war machine, the sooner the peace and good peace is going to be back in Europe.”

Despite countless discussions about a gas price cap in Europe, citizens continue to see their energy bills skyrocket as EU leaders fail to find a solution.

“Several countries, including Poland, some months ago, [in] April, May and June, we pushed the European Commission and some other northern countries in particular, together with Italy and Spain. We were trying to action aid”, Poland’s Prime Minister explained to Euronews.

“We are trying to stimulate [an] appropriate common denominator… because we knew that the cap on gas [prices] should be found somewhere in the middle of our expectations and some expectations of Germany and the Netherlands and the others. However, the way they stubbornly blocked this is, to me, quite worrisome because I believe that we are still far from finding a compromise on a gas price cap.”

When asked if Germany and the Netherlands were to blame for this deadlock, Morawiecki insisted that “I’m not blaming anybody, but I’m just signalling that solidarity for the whole of Europe means to work out, as quickly as possible, a common denominator and not always the lowest common denominator.”

As negotiations reach a deadlock, concerns are being raised that the continent’s energy security may be at risk this winter, and for many winters to come. According to Poland’s Prime Minister, people are right to be concerned.

“The European Union is…an economic powerhouse. We can push our partners — and I don’t mean Russia by this, I mean other countries — to have mid-term or long-term agreements on gas set on an appropriate level and [which are] not dependent on such huge fluctuations and speculation which happened in August of this year and in September.”

As the war in Ukraine continues, French president Emmanuel Macron said that the West should consider giving security guarantees to Russia to end the war. But Mateusz Morawiecki told Euronews that Moscow doesn’t need such guarantees.

“I think that Russia, being a superpower, [being] weakened but still having a nuclear weapon and a strong army really does not require any type of guarantees because they have the guarantees in their own hands.”

“The only country which needs support and guarantees for their sovereignty and security is Ukraine here. So this is why I think that our appropriate approach would be to support Ukraine through stronger weapon delivery and financial aid so that Putin and the Kremlin see that we are serious in supporting Ukraine not only throughout this winter but in the years to come.”

The rule of law: is the shoe on the other foot?

The European Union decided to freeze EU funds for Hungary over concerns that this money may aid corruption. When asked for his thoughts about this decision, Morawiecki revealed that he believes Hungary is being unfairly treated.

“As far as the approach of the European Union to Hungary is concerned, I think that given that Hungary has quite a conservative government, this is one of the reasons why Hungary’s attacked [so much]. I’m not an expert on the Hungarian ecosystem [but] I think that a significant part, if not all of the attacks are unjustified.”

Concerns were also raised about Poland, but no such decision was made, leading many to decry what they see as double standards for Poland and Hungary.

“I can only emphasise that both Hungary and Poland are treated in a very unjust way, it shouldn’t have been the case.”

“We are targeted by the European Commission all the time for the last couple of years because they do not agree in repairing, or in reforming post-communist judiciary [systems].”

When asked if he felt that Brussels had softened its attitude towards Poland since the war broke out in Ukraine, Mateusz Morawiecki strongly disagreed.

“Softened? I don’t see this at all. I see that they are still very brutally intervening beyond their competencies, which are not included in the treaties. And we are quite loud about this. So this is why I’m so surprised with their approach [over the] last [few] years.”

What Can the United States Bring to the Peace Table

How far should we go with gene editing in pursuit

Israel says has not found a link between Pfizer COVID